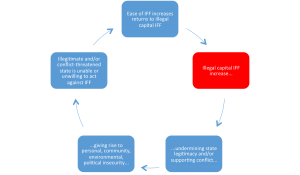 The UN Sustainable Development Goals (SDGs, the global framework guiding policy until 2030) include a target to reduce illicit financial flows (IFF), under SDG 16 on peace and security.

Our research director, Alex Cobham, has written an article for the European Centre for Development Policy Management tracing the linkages between illicit flows and security, and the basis for this important target – along with a few additional suggestions for indicators, to ensure its effectiveness.

The political emergence of the linkages is a recent phenomenon. In 2014, the Tana High-Level Forum on Security in Africa took as its theme the impact on peace and security of illicit financial flows. Leading figures from across the region, including a range of current and former heads of state, discussed the nature and scale of illicit flows and the policy options available.

The subsequent report of the High Level Panel on Illicit Financial Flows out of Africa, chaired by Thabo Mbeki, cited the Tana Forum background study and reiterated its analysis of the linkages.

Tax is important not only for revenue and redistribution, and for repricing things like tobacco and pollution; tax is a central part of the citizen-state relationship, and the basis for effective political representation. Similarly, IFF thrive on conflict and insecurity and also exacerbate both, undermining the financial and political prospects for effective states to deliver and support development progress.

The article highlights the existence of vicious cycles, but also the opportunity: that success in curtailing IFF is likely to have significant benefits in revenue terms, in reducing insecurity, and in supporting the emergence of more effective and representative government.