Nick Shaxson ■ Belize and the curious tale of the British lord 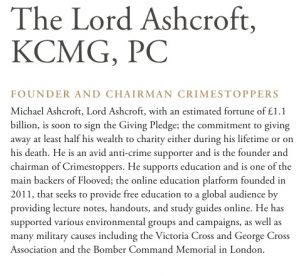 From Debrett’s: a strong interest in tackling crime

Britons have been titillating themselves recently with some sordid but quite likely untrue allegations made against UK Prime Minister David Cameron by Lord Michael Ashcroft (whom in making the allegations may have been motivated by pique or revenge.)

We won’t dignify these allegations by spelling them out, but we will note that Ashcroft’s considerable financial fortune has been partly tied up with financial activities in the tiny tax haven of Belize. It has long worried us and many others that he had for so many years such a powerful influence in Britain’s ruling Conservative Party. Now, as Jesse Drucker reports for Bloomberg:

“He is the controlling shareholder of a Belize company called BCB Holdings Ltd., which in turn owns Belize Bank International Ltd. and Belize Bank Ltd., according to BCB’s latest annual report. Lord Ashcroft was BCB’s executive chairman for more than 20 years beginning in 1987, according to earlier annual reports, one of which listed him as the CEO in 2005.

U.S. scrutiny of account-holders at those banks emerged in mid-September, when a federal judge in Miami authorized the IRS to issue summons to two U.S. banks for information related to the Belize banks’ account-holders. U.S. taxpayers have revealed at least 23 previously undisclosed accounts at the two Belize banks as part of a voluntary disclosure program, according to the IRS, whose efforts are focused on learning the identities of more such U.S. clients.

“The IRS knows — from interviews, voluntary disclosures, and records of criminal prosecutions — that U.S. taxpayers have used the Belize entities to set up and maintain undisclosed accounts to evade their U.S. tax obligations,” U.S. prosecutors wrote in support of the IRS’s request.”

And, as Private Eye reports:

“Ashcroft acquired the bank in 1987, resigning as chief executive in 2010 but remaining the controlling shareholder of its holding company. . . . though he was chief executive until 2010, Lord Ashcroft clearly cannot have known what was going on at his small central American bank. But perhaps the founder of the Crimestoppers charity ought to have been a little more curious about why customers were using bearer shares, mail holding accounts, nominee directors and all the other accoutrements of offshore tax crime.”

According to the Financial Secrecy Index, Belize – although small – is one of the world’s more secretive jurisdictions. No doubt most taxpayers banking there have been scrupulous in their declarations.