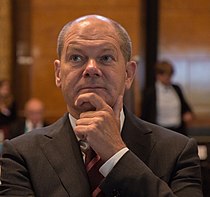 The Financial Times is carrying an article this week titled “Berlin falls in love with big banks” in which it quotes Chancellor Angela Merkel and her centre-left finance minister, Olaf Scholz, as having started a rapprochement with financial institutions:

wooing large, global lenders and positioning themselves much closer to the financial sector. Mr Scholz has called for a “reappraisal” of active industrial policy in favour of the financial sector, arguing that Germany’s banks are too weak to support corporate interests.”

Scholz, whom we criticised recently for his deference to multinationals and tax havens, has also brought in the former Goldman Sachs banker, Jörg Kukies, as his deputy. Kukies told the FT:

We want to be perceived as a country which appreciates when banks create jobs in Germany and bring over capital and knowhow.”

Scholz also told a Goldman Sachs conference that he wants the central clearing of trillions of dollars of derivatives trades moved from London to Germany. Worse still, though, the FT reports elsewhere:

Scholz . . . has time and again stressed that the German economy needs strong and globally competitive banks to support its export-oriented economy . . . Berlin is warming up to the idea of eventually merging Deutsche and Commerzbank.”

That old ‘national champions’ argument, which is a version of the ‘national competitiveness’ arguments made in the UK all the time: giant global banks as a path to a better future. We’ve been here before, and not that long ago.  In fact, Germany’s own Monopolies Commission warned about this, ahead of the global financial crisis. Here is one among many of its criticisms:

The following point is more disturbing: similar policies helped cause the financial crisis in Germany in 1931, which in turn contributed to the rise of fascism and eventually global warfare. All this is incredibly dangerous. Large financial institutions have always been influential in Germany, of course — witness, for example, Germany’s dangerous and austere response to the Greek crisis, caused in significant measure by reckless lending to Greek borrowers by German banks. But it’s probably fair to say that German carmakers have had more political clout. This now appears to be changing. And let’s not forget that Germany is already a major tax haven.

Overall, Germany is actively courting the finance curse, and Scholz appears hell-bent on accelerating this process. When a financial sector grows beyond its useful size and role, it starts to inflict damage on the country that hosts it. Jobs and tax revenues generated in the financial sector are offset by much larger damage in other parts of the economy and society, in a complex range of areas: too-big-to-fail banks, a brain drain out of other productive sectors, the financial equivalent of the Dutch Disease (where local price levels rise, crowding out other sectors), the capture of the establishment by financial interests, the transformation of finance away from its useful wealth-creating roles into more profitable wealth-extracting roles, rising inequality, and much, much more.  To illustrate the potential pitfalls, compare productivity in the two countries to see how poorly finance-dependent Britain does compared to car-crazy Germany.

This woeful British performance has many causes, but the finance curse analysis may well provide the best general framework for understanding what has gone wrong.

Yet this isn’t all that’s dangerous about Scholz. Back in July we wrote a piece entitled Why is Germany siding with the tax havens against corporate transparency? in which we argued that Scholz was sabotaging a key European transparency measure through procedural measures, apparently designed to allow multinationals and tax havens veto any measures.

Now German newspaper Bild is carrying a story entitled Scholz bends in front of Google, Facebook and Co, which is summarised (web translation here) by Sven Giegold, the European MEP (and a founder of the Tax Justice Network):

the Federal Ministry of Finance rejects the introduction of a digital tax for companies such as Google and Apple. The “demonization of large digital companies” was “not effective.”

So large global technology monopolies and their aggressive efforts to squash competition are just fine, Mr. Scholz appears to be saying.

What is more, Scholz appears to be unfriendly towards a financial transactions tax (FTT). As Giegold put it:

The SPD was the political party that had campaigned hard for an FTT – but once in office it simply threw the measure out of the window.

Former German Finance Minister Wolfgang Schäuble was, for all his faults, rightly suspicious of big banks, once telling Deutsche Bank’s boss Jürgen Fitschen that banks had shown “great creativity” in escaping regulation, with Fitschen arguing back that this was “irresponsible” and “populist” and that “it’s unacceptable for people to stand there and say that banks are still circumventing the rules.” This is somewhat reminiscent of the words of former British Prime Minister Tony Blair, another ‘centre-left’ politician enamoured with the financial sector, when he said, soon before the global financial crisis substantially caused by British banking deregulation, that the regulators were:

seen as hugely inhibiting of efficient business by perfectly respectable companies that have never defrauded anyone”.

“Seen as” – but by who? By Blair’s good friends in the City of London, of course. Now this same reckless class of global finance bosses who captured the British establishment seems to be getting a good hearing in Berlin.

Oxfam in Germany gave a good summary of what’s going on, in a direct appeal to Scholz:

After 150 days of social democratic fiscal policy, important tax policy demands from the election campaign seem forgotten – because they do not correspond to the interests of the financial industry and multinationals.”

It may seem odd that the centre-left politician seems to be bowing down to these global giant monopolies, while his predecessor, from the right wing, has taken the more cautious and pragmatic view. Germany’s Tagesspiegel newspaper summarised things a different way:

The longer the SPD co-governs, the more unclear it is what it stands for. . .because Europe’s Social Democrats do not dare to conflict with the [owners of capital], they are losing their credibility and voters at a staggering pace.”

It’s hardly surprising that the SPD is in free fall. As one observer of Germany described it to us, via email:

Since the Bundestag election in 2017, where the SPD had its worst result ever (20,5%). it is now in free fall. In the most recent poll the scoial democrats only received 16 %, now behind the far-right Alternative for Germany (AfD) and in many federal states polls in fourth or fifth place.”

Have they not observed what has happened in other countries? If citizens do not have a credible voice on the mainstream left to turn to, where are they going to turn? As Martin Wolf said in an excellently argued article, also in the FT:

Are the latest unpleasant events in the German town of Chemnitz really such a surprise?