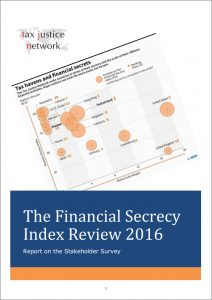 Our new FSI survey report, with many thanks to all who contributed

The implications of financial secrecy offered by tax havens have never been higher on the agenda of both national and international policymakers. The difficulty in defining tax havens and the susceptibility to political pressure on processes of drawing up lists of havens led the Tax Justice Network to create the Financial Secrecy Index (FSI). Conceived in 2007 and published on a biannual basis since 2009, the FSI ranks some major economies ahead of the ‘usual suspects’ and reveals a spectrum of secrecy rather than a binary division between ‘tax havens’ and others.

While some methodological improvements have been made since the FSI was first published, in 2016 we carried out the first full-scale review of the index in order to adapt the FSI for the decade ahead. The review process comprises two main elements: firstly, an independent statistical audit by the Joint Research Centre (JRC) of the European Commission, and secondly, a detailed and technical survey with various stakeholder groups.

Today, we publish the results of the stakeholders survey (pdf). The survey was conducted from January to March 2016, and distributed across TJN networks and to specific stakeholder groups through targeted emails. Over 200 people responded to the survey, (although 70 were screened out by an introductory question regarding knowledge of the FSI). The remaining 136 respondents come from 49 different countries, including developing countries, OECD member states and small island financial centres. Of these, 86 respondents completed the entire survey, and therefore for each question we have between 86 and a maximum of 136 responses.

Respondents include professionals and academics in various fields including economics, accounting, law and political science; experts within civil society and from international institutions; representatives of NGOs; expert users of the FSI (e.g. rating agencies); tax authority officials; and TJN supporters.

The main findings of the survey focus on possible changes and additions to the secrecy indicators; the scale measurement; presentation of the index and the underlying database; and broader comments on the index. While a detailed analysis of the results is provided in the report, here are some general conclusions worth highlighting with regard to the two core components of the FSI, i.e. the secrecy indicators and the scale measurement. The respondents broadly favour maintaining the current approach of equal weighting of all indicators (rather than providing each indicator with a different weighting); and while there was broad support for greater prominence for additional indicators on tax avoidance, it was less clear if these indicators should form a separate index or be included in the FSI. As for the Global Scale Weight, respondents expressed broad support for the current scale weight calculation, although there was no strong consensus on the question of the balance between scale and secrecy in the FSI value.

In combination with the statistical audit, the results of the survey will form the basis for a series of proposed reforms of the FSI, which will be developed and tested with tax and financial experts and published towards the end of 2016.