Where are you going on your next holiday?

The chances are if you are flying to a Sun&Sea destination, it will be with a tax-dodging company.

A guest blog by Linda Ambrosie. Listen to her on the Taxcast here.

Do you recognize any of these names: Barceló, TUI or Melía?. In English-speaking countries, these names may not be familiar. How about these companies: Thomson (UK), Sunwing Travel Group (Canada), Innside (Germany)?

And you thought you were doing your best to avoid the tax dodging companies. Well, think again.

The truth is that it’s hard to avoid the avoiders partly because families seek holiday savings in times of diminishing real salaries. Some of the tax avoidance windfalls may leak through into lower prices for families, at least in the short term. But these groups are so large and ubiquitous it is almost impossible to travel overseas without using one of their airlines, cruiseliners or hotels. Barceló touts 90+ direct companies, Melía has 144 companies and TUI AG has 677 direct and indirect subsidiaries. The vast range of seemingly independent tour operators and hotels is nothing more than an illusion of choice.

It may well be that this market dominance has raised customers’ holiday costs overall, even while the companies were extracting money from taxpayers.

But infrastructure is just one of the motivations for these powerful and vast corporations to invest. Ostenstibly, tourist satisfaction drives resort selection. But visibly, much investment is driven by windfall profits and “tax-loss carry-forwards”, thanks to legislated tax loopholes and willing local officials who either ignore or aid in the violation of tax, environmental and employment regulations. (A tax loss carryforward is a loss on operations in the current year that can be carried forward to future years’ profits to be deducted against those gains.) 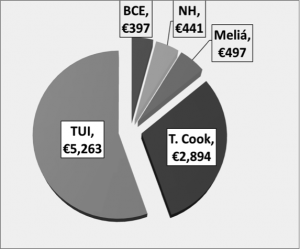 When the losses are large, accounting rules stipulate that companies can only record on their balance sheets the fraction that is reasonably expected to be recovered or offset – called realizable loss carryforwards. The amounts of loss carry-forwards were so large, that only a portion of them is realisable.

For example, of the €5.3 billion that TUI had accumulated as of 2012, it only expects to deduct €217 m, less than five percent. Thomas Cook will deduct five percent of its losses; Spain’s Barceló 12 percent; Melia 14 percent; and NH 32 percent. These loss carryforwards are so large that even if these webs of companies began paying their fair share today, they would pay no taxes until 2020 and beyond. While losses are declared at head offices in Spain and Germany, the surplus cash generated by tax credits is then re-invested in new or expanded hotel properties at the same destinations such as Mexico’s Cancún and Riviera Maya as foreign direct investment (FDI) – channeled through tax havens rather than directly from Spain.

More than 80% of the hotel rooms in the Mexican Caribbean are All-Inclusive and 80% of the owners of these are Spanish groups. Yet the FDI patterns don’t reflect this at all: investment levels from Spain are the same as the national average for all of Mexico for all types of investment – while the countries with above-average investment levels were Panama, Switzerland, the Netherlands and the British Virgin Islands: all well-known tax havens.

The host countries don’t get the cream

Thanks to schemes such as the Dutch Sandwich, only an estimated 20% of the package price arrives at the destination which deprives the host destinations of resources to ensure sustainability. Yet these same tourism corporations signed an accord in London, UK promising

“a shared vision of a sustainable outbound tourism industry … working in partnership with governments and communities in tourist destinations” (p5).

To do so, the original signatories such UK’s TUI Plc, Thomas Cook and Carnival committed to a

“clear vision of a profitable, successful future in which the travel and tourism industry recognises its wider responsibilities to society” (Forum for the Future, 2009).

How can countries ensure tourism infrastructure and security without taxes?

So the next time you go on vacation paid for from your declining real wages and are encouraged to stay within the hotel boundaries or take only hotel-sponsored tours due to possible safety issues, ask yourself about the hotel’s motivation and who is the culprit if local people do NOT see the benefits of your tourism dollars at work?

For more information about the hidden world of Sun&Sea Tourism, the book is

Dr Linda M. Ambrosie received a PhD in Accounting with a special interest in taxation and tourism from the University of Calgary. She is also a Chartered Professional Accountant. Prior to working towards her PhD in Canada, she owned and operated several incoming tourism companies in Mexico, selling primarily to European clients.