Nick Shaxson ■ How 1/8th of Moldova’s GDP vanished, via a Scottish council flat 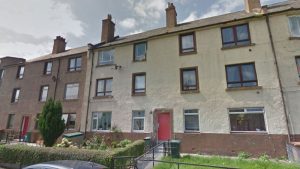 “The UK is one of the easiest countries in the world to set up a company in, and some agents offer to do it in an hour, for as little as £25.”

In standard parlance, this makes the UK an ‘efficient’ place to set up a company, reassuringly free of that pesky ‘red tape.’ All good stuff.

But wait a moment. This quote comes from a story that also contains this:

“The loss of the money – equivalent to an eighth of Moldova’s entire GDP – has thrown the country into economic and political chaos.”

And this money seems to have disappeared via this Scottish ex-council flat in our picture. More precisely, as the report notes:

“One of the companies registered at the address is Fortuna United LP, the UK partnership named in a leaked report by Moldova’s central bank as the firm with the rights to the billion dollars which disappeared last year from three of the country’s main banks.”

See the story for the full details – but to cut a long story short, a result of all this looks like this. Now, perhaps, we are in a better position to ask how ‘efficient’ these ‘light-touch’ company formation rules really are. But this story is only partly about the rules. It’s about nobody giving a damn about checking up on any of this.

There is lots more in this story alone – it’s chock full of valuable messages.

To find out more about this excellent investigation, listen to this BBC radio programme entitled Dirty Money UK; or its June 2015 predecessor; or follow Ian Fraser, or Richard Smith on Naked Capitalism, who’ve been doing a lot of digging in this area.