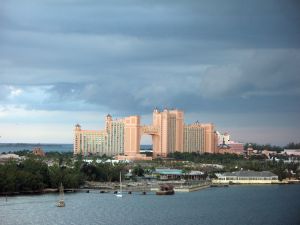 Atlantis Resort, Bahamas. Another behemoth, Baha Mar, is being built.

Written for TJN by someone with long experience of the Bahamas.

The Bahamas is a stunningly beautiful archipelago of more than 700 islands, cays and islets, a proud nation populated with vibrant, passionate, good-hearted people. The economy of this small island state, ranked at 35th position on the 2013 Financial Secrecy Index and assessed towards the top end of the secrecy scale, is heavily reliant on the offshore financial services industry; the Bahamas is in the throes of the Finance Curse, as a captured state.

Now, while offering an escape for the wealthy of other countries from taxes, the Bahamas government intends to impose a regressive Value Added Tax (VAT) regime that risks severely damaging local business and will increase suffering in the poorer communities. A somewhat similar situation has been brewing in Barbados.

Anger at government corruption and cronyism in the Bahamas has fuelled a backlash against VAT, and community organising is rising. As a Bahamian recently told me, in an email:

“The Bahamas ranks as the richest in the region for per capita GDP income – but the majority of the people are not feeling this wealth.”

There is anxiety that VAT receipts would not be applied to debt reduction, and that ineffective VAT administration and wasteful public spending would cripple any potential gain for the country’s finances.

Government says sorry to UBS exec. The Government has quickly apologised to a top banking executive detained in an immigration road check, after he apparently became “irritated” by requests for proof of legal residency. If he hadn’t been a banker, would he have got an official apology?

One set of rules for the financial élites . . .

True to the financially ‘captured state’, the local media spun it very differently: “The detention has already prompted claims that the Immigration Department is “systematically driving business from this country.””

There is a fear of outright fraud, with Hungary providing a recent example of such risks. Meanwhile, as reported in the Tribune242 in Bahamas Enjoys Swiss Private Wealth ‘Influx’, a managing partner at Ernst & Young (Bahamas), has explained:

“Recently, the US government, from its conversations with the Swiss government, is able to go directly to the Swiss banks and demand that that information be disclosed. We’re seeing an influx of some of that wealth to the Bahamas as a result of those engagements.”

Also, quoted from an interview with an investor in a luxury condo development:

“With the tax laws changing in Switzerland, we’re seeing more people coming in… Instead of sitting in Switzerland with a bank deposit, they’re actually opting to move here and become a permanent resident.”

Units in the as-yet unnamed condo project start at $595,000, comfortably above the $500,000 threshold that entitles you to apply for economic permanent residency – thus ensuring it is attractive to this market segment. Bearing in mind the economic residency provision, it is intriguing that the Bahamas government has been allowing a tax amnesty for wealthy property owners, with the government presumably having been less than diligent in enforcement for some time – or turning a blind eye. One report notes:

“Twenty-one percent of the country’s outstanding real property taxes relate to just 229 properties – 0.3 percent of all assessed – and over 56 percent of arrears are owed on properties valued at over $1 million, a situation the International Monetary Fund (IMF)?has described as “alarming.”

Wealthy residents will also have access to some particular ways of avoiding the impact of the proposed VAT; if you have a nice-sized boat or a private plane it is easy to bring in your goods tax-free.

It is the established pattern, as our box about the public apology to the UBS executive illustrates: one set of rules for the wealthy; another set of rules for everyone else. As my e-mail correspondent notes:

“Over our entire history as an independent nation our primary economic interest has been geared to serve the foreign and elite investment class – leaving the average locals increasingly marginalized in their economic and social rights.”

A private sector Tax Coalition is proposing a range of other alternate revenue generators to VAT. There’s an ironic twist in the story, though: it cites measures to crack down on transfer pricing abuse:

“where Bahamian firms are ‘invoiced’ by their own dummy companies in Florida.”

It is argued that there is legitimate business conducted through the Bahamas financial services industry by ethically-motivated, community-minded professionals. There is a local perception that larger nations, the USA as a particular example, engage in hypocrisy in extending their long arm to point at the Bahamas as a culprit in offshore tax havenry while providing such services themselves. Which is certainly true: a view that is clearly supported by TJN’s Financial Secrecy Index.

Bahamas Prime Minister Perry Christie, in an address to the United Nations at the 68th General Assembly, stated:

” … we need to challenge the United Nations to take the lead in developing and refining multilateral mechanisms for the governance of the offshore financial system.”

If this represents genuine intent and not a smoke screen, that would be good news. Let’s see.

But leaving aside the issue of whether or not the Bahamas financial services industry can provide a legitimate, duly transparent product, it is important to ask whether, or to what extent, the financial sector is really benefiting the local population. It is sure that heavy reliance on offshore service provision and crowding out of other economic opportunities causes unnecessary hardship and restricted progress for many within the local community.

There can be alternatives, as explored in Looking for Plan B: What Next for Island Hosts of Offshore Finance, a paper by Dr Mark Hampton (University of Kent) and TJN Director John Christensen, published in The Round Table (the Commonwealth Journal of International Affairs). ActionAid and Christian Aid are interested in exploring economic development scenarios and options for jurisdictions where offshore service provision currently plays a dominant role in the economy.

Formerly a British colony, the Bahamas last year celebrated 40 years of independence. As a captured state, it could be argued, where is the real independence? Is the Bahamas under the influence of puppet-masters amongst a stateless global elite acting for their own enrichment at the cost of others’ suffering? If the choice is made to reject crippling inequality and economic injustice, the Bahamas has potential not only for its own people to thrive, but also to help show the way for others as a nation that contributes to a fairer global community.